It’s Thanksgiving weekend here in Canada and for Victoria that means it’s Marathon time! Every year on the Sunday of Thanksgiving weekend there is the Goodlife Fitness Victoria Marathon. The event has a marathon, half-marathon, 8km run and a kids run. This year both of us were up early running so we thought we would give you a little re-cap of the morning because we believe that health and wellness is a key part to being a great teacher!

Karley’s 8km – It’s been 10 full years since I woke up at 5.30am to do exercise. I used to get up this early all the time when I was a spry, young gymnast, but this ol’ girl has enjoyed a decade of not exercising in the morning and is a wee bit out of practice. Running is a fairly new favourite activity of mine. For a year and a half I’ve been running sporadically and registering in a few 5k races; this past summer I did my first 10k race. Now I can officially say: I love to run!

I’ve been feeling a bit sick these past few days, and my right side has been tight lately, so going into this 8k run I wasn’t feeling super reliant on my body. Nevertheless, I was still very excited to run! My body didn’t let me down, because my mind didn’t let that happen, and I completed this 8k run with a new personal best time (50min21secs) and new personal best endurance record. I also managed to negative split every kilometer except number 6 (I didn’t stop to get water, but slowed down to scoop up a cup…caused me a few seconds!) This run was just incredibly inspiring – I found myself tearing up a bit as I drove into the downtown core at 6.15am with all the other racers (clearly everyone on the road was heading to the race…no one else in their right mind would be awake and coherent enough to drive at that hour on a Sunday). Running with thousands of people of all shapes, sizes, abilities and ages along the ocean side Dallas Road during sunrise was almost too much to handle! I definitely had a giant smile plastered on my face the entire time, except the last 400m where I ran harder than ever before. I kept telling myself, “Eyes up! Finish line! Eyes UP!” 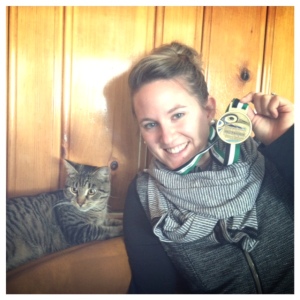 Aren’t those medals gorgeous? And isn’t that photo of Meaghan below also gorgeous!? Who looks that good after finishing a Half Marathon!?

There is something so special about sharing health and wellness with one’s community. This morning I felt like we were all in the 8k together, even though we were individually in charge of our bodies – I think this is what I’ve come to love most about running. My running has improved dramatically since June; seeing this improvement keeps me pushing for more. Personal improvement and increased fitness is something that is important to me; seeing definite personal improvement in my running is something gymnastics never provided for me because other people were always determining my successes (and failures). For a girl who has battled eating issues, body image issues and this interesting love-hate relationship with exercising, getting into running has proven to become a big deal for me. I am immensely proud of myself and plan to keep on going with this running thing…a few nights prior to this race I decided I’m going to do my first half marathon next August (10 points if all you Vancouverites can guess which one!) Bring it on! 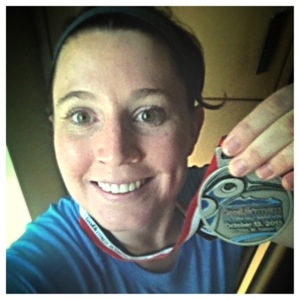 What a day and what a week! I was feeling so ready for this race and just wanting to run with everything I had and let it all go. It felt so good. I ran 90% of it with a smile on my face because I was so happy to be able to run and have so much support for friends and family. My brother dragged himself out of bed super early to come watch me which was so awesome! I ran a 2:06:39 which is over 6 minutes faster than my last half so I’m ecstatic! I felt so good for (almost!) the whole race and I love that feeling of pushing myself to the limits. Throughout the race I tried to focus on gratitude and being thankful for what I have been given in this life but I was going to allow my self the last 3 km to be angry and frustrated and get it all out. By the time 18km came around I didn’t feel the need to be angry, I was feeling at peace with the whole situation and I think practicing gratitude is a big part of that. I’m so lucky and I have so much to be thankful for (it is Thanksgiving after all!) that as much as I needed to stand up for myself and let my voice be heard, now is the time that I need to let it all go. Instead for the last couple kilometres I thought of my dear friend Julien-Pier, and how happy he would have been to see me actively choosing happiness and gratitude. I want his spirit to live on within me and I have found that running is a place where I can truly let this happen and actively think about these things. I’ve been talking about it for a little while now but I think a full Marathon might be next and I want to do it in honor of his memory… Wait and see!

We managed to find each other before our races started! Check out how dark it was when Karley’s 8k started…and check out that stunning sunrise along Dallas Road! We are thank-FULL to live in such a beautiful place.

One thought on “Tale of Two Runners”